Conservation Districts were born out of necessity in the 1930 Dust Bowl when America’s topsoil rapidly eroded. At that time, Congress declared soil and water conservation a national policy priority, leading to the birth of the conservation district. It had taken a thousand years for Nature to build an inch of topsoil on the Southern Plains, but it took only minutes for one good blow to sweep it all away. The water level of lakes dropped by five feet or more. The wind picked up the dry soil that had nothing to hold it down. Great black clouds of dust began to blot out the sun. In some places, the dust drifted like snow, darkening the sky for days, covering even well-sealed homes with a thick layer of dust on everything. Dust storms engulfed entire towns. The primary impact area of the Dust Bowl, as it came to be known, was on the Southern Plains. The Northern Plains weren’t so badly affected, but the drought, dust, and agricultural decline were felt there as well. The agricultural devastation helped to lengthen the Great Depression, whose effects were felt worldwide.

One hundred million acres of the Southern Plains were turning into a wasteland. Large sections of five states were affected — Texas, Oklahoma, Kansas, Colorado, and New Mexico. 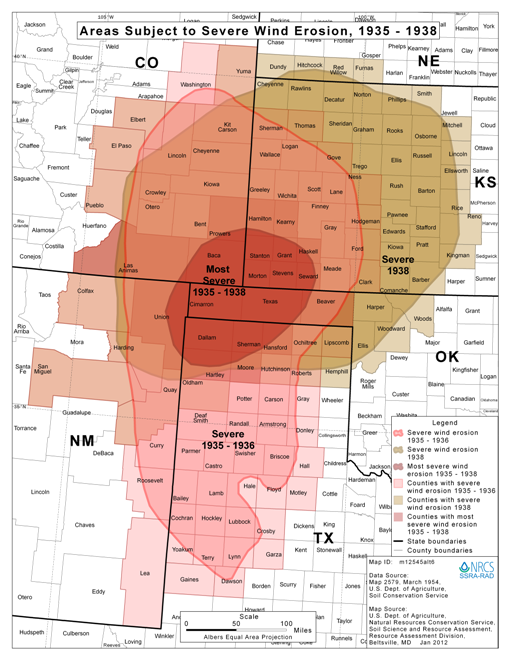 In 1932, the national weather bureau reported 14 dust storms. The next year, they were up to 38. The dust was so thick that people scooped up bucketsful while cleaning the house. Dust blocked exterior doors; to get outside, people had to climb out their windows and shovel the dust away. Dust coated everything. Nevertheless, farmers kept on plowing, hopeful that the rains would return in a matter of days, or perhaps months. In the spring of 1934, the massive drought-impacted 27 states severely and affected more than 75 percent of the country. It was the worst drought in U.S. history.

Families survived on cornbread, beans, and milk. People were beginning to give up hope, and a mass exodus — the largest migration in American history — ensued from the plains. Many families packed their belongings, piled them on their cars, and moved westward, fleeing the dust and desert of the Midwest for Washington, Oregon, and California. They were willing to work for any wage at all, planting and harvesting other people’s lands. When those families reached the borders of those western states, they were not well received — too many people already there were out of work. Many California farms were corporate-owned, meaning they were larger and more modernized than what the farmers were used to. Families often lived in tar-paper shacks with no floor or plumbing. By 1940, 2.5 million people had moved out of the Plains states toward the Pacific states. In the fall of 1934, with cattle feed depleted, the government began to buy and destroy thousands of starving livestock. Of all the government programs during that time, the cattle slaughter was the most wrenching for farmers. Although it was difficult for farmers to give up their herds, the cattle slaughter helped many of them avoid bankruptcy. In the spring of 1935, the wind blew 27 days and nights without stopping. People and animals began to die of suffocation and “dust pneumonia.”

For more information on the Dust Bowl, these references from the USDA are available.

The government began to offer relief to farmers through President Franklin D. Roosevelt’s New Deal. Roosevelt believed it was the federal government’s duty to help the American people get through the bad times. During the first three months of his presidency, a steady stream of bills was passed to relieve poverty, reduce unemployment and speed economic recovery. While these experimental programs did not end the Depression, the New Deal helped the American people immeasurably by taking care of their basic needs and giving them the dignity of work, and hope during trying times.
Hugh Hammond Bennett, who came to be known as “the father of soil conservation,” had been leading a campaign to reform farming practices well before Roosevelt became president. Bennett called for “…a tremendous national awakening to the need for action in bettering our agricultural practices.” He urged a new approach to farming in order to avoid similar catastrophes.

In April 1935, Bennett was on his way to testify before a Congressional committee about his soil conservation campaign when he learned of a dust storm blowing into the capitol from the western plains. At last, he believed that he would have tangible evidence of the results of bad farming practices. As the dust settled over Washington and blotted out the midday sun, Bennett exclaimed, “This, gentlemen, is what I have been talking about.” Congress responded by passing the Soil Conservation Act of 1935. In addition, the Roosevelt administration put its full weight and authority behind the improvement of farming techniques.

President Roosevelt ordered that the Civilian Conservation Corps plant a huge belt of more than 200 million trees from Canada to Abilene, Texas, to break the wind, hold water in the soil, and hold the soil itself in place. The administration also began to educate farmers on soil conservation and anti-erosion techniques, including crop rotation, strip farming, contour plowing, terracing, and other beneficial farming practices.

More references and a documentary on the history of the National Regional Conservation Service (NRCS) and Conservation Districts are available for further reference.